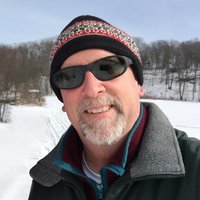 Steve Dahnert joined NOLS as CFO in March 2020 after a long career in higher education, including 25 years in finance at Vassar College and earlier stints as a fundraiser at Penn and Trinity. He first learned about NOLS through his daughter, Ali, who completed the spring semester in the Rockies program with WFR in 2018. Further encouragement to pursue a role at NOLS came from son Sam, who completed several rigorous adventure trips through the Chewonki Foundation. Steve and his family have long enjoyed outdoor adventures including summers spent lakeside in Maine, hiking in the Northeast and American west, regular ski excursions in the Rockies and Northeast, and bike adventures including some touring. Steve and his wife, Jen, are currently splitting their time between Lander and their home in New York.