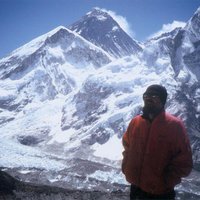 After earning a degree in History and Philosophy, David served as a college outdoor programs director, running climbing camps at Joshua Tree National Park. He has worked extensively as a commercial river guide running river expeditions in the Western U.S. from Arizona to Alaska. His winter work has included teaching telemark skiing and ski patrolling. David’s love of travel has inspired spending significant time in India, Nepal, Tibet, Central America, and the Middle East. His interest in wilderness medicine came early in his outdoor career after becoming an EMT and WFR in 1990. David is currently a Certified Emergency Nurse and a Fellow in the Academy of Wilderness Medicine. He splits his professional time between working as a field instructor for NOLS Expeditions, teaching NOLS Wilderness Medicine courses, and working as an RN in both emergency and hyperbaric medicine. While making Portland, OR his home base, David still spends significant time in the mountains, on rivers, and abroad.