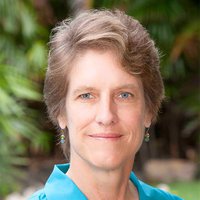 Terri first came to NOLS as an instructor in 1990. In 1996, she took the reins as director of NOLS Southwest in Tucson. She became a NOLS Wilderness Medicine instructor in 1999 and continues to teach a few courses each year.

Most recently she was the CEO at LightHawk, an international nonprofit based in Colorado that supports conservation initiatives with a network of volunteer pilots and aircrafts to advance environmental causes. She has also served as Executive Director of the Pearl Harbor Institute of Pacific Historic Parks and The Farallones Marine Sanctuary Association in San Francisco as well as serving in extensive nonprofit leadership and consulting roles nationally and internationally for nonprofits, federal resource agencies, and others.

Additionally, she is a veteran of the U.S. Army, where she served for many years as a commissioned aviation intelligence officer. And she is the former founder and owner of the Lander-based company Winds Aloft Aviation, Inc., which conducted natural resource management flights across the Rocky Mountain states in support of federal and state agencies. She also flew extensively as a LifeFlight and Search and Rescue pilot in airplanes and helicopters.

Terri is married to long time NOLS instructor Kimi Harrison. They have no children but have nieces and godchildren they adore and a cat who is spoiled rotten. A puppy is likely on the horizon. Terri and Kimi reside in Lander, Wyoming.